Frau Holle has has not been kind towards the Northern Alps this season. After a massive snowfall early in November, dry and sunny weather have been the main course for almost two months now, making turns outside the slopes close to impossible.

But to our luck, Frau Holle is a businesswoman. So when Snow Park Montafon placed their new 4-kink rail, I called her and asked for an agreement: she should give Silvretta Montafon at least 10 centimeters of fresh snow for every kink I cleared. Of course she said yes to such a nice deal, so we hurried our way from Denmark, 15 hours on the highway and up into Grasjoch. A couple of tries later and it was done business and time to celebrate a good day of skiing with a beer in the sun.

And it definitely looks like Frau Holle keeps her promise, for the next days should bring +60 centimeters of fresh snow! Fingers crossed and see you up there!

(Whether the story is true is for you to judge) 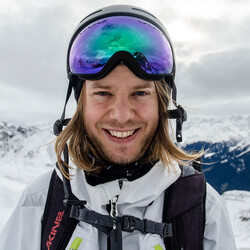 Hi Guys, I'm Alexander. I'm a 30 years old freeskier from Copenhagen, Denmark. I first fell in love with Montafon back in 2008, and decided to spend a full winter in St. Gallenkirch in 2009/2010, which then became my second home. Since then I have spent several weeks every winter in Silvretta Montafon, skiing the Snowpark Montafon and exploring the backcountry of Hochjoch and Nova. Back in Copenhagen, I am publishing articles for the leading danish freeski portal Riders.dk, have been managing several snow projects in Denmark and work as a consultant in an advertising agency.